Our story begins in March 2000 when our Founder, Tony McGinnity, thought that it would be a good idea to gather together a few former Merchant Navy Officers residing on the Island to meet for lunch in order to exchange views on the possibility of forming an Island Association representing the Merchant Navy. 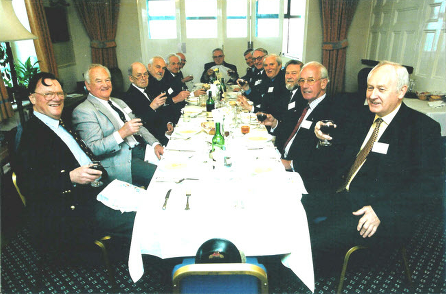 Tony was elected Chairman of the first Committee whose members were: John Ager, John Woodford, Mike Guy and Mike Leek.

Following news of the launch in The Isle of Wight County Press the membership increased to seventeen within a week and a steady growth continued throughout the year 2000.

Our first lady members were admitted in 2001and our growth has been sustained over the years, maintaining a net membership of around seventy for a number of years.

Tony stood down as Chairman in 2004 and in recognition of his determined leadership and inspiration in guiding us from strength to strength, was unanimously elected as Life President and served until his untimely death on 10th June 2008.

Peter Burman became Secretary, combining Membership in 2002, the Membership Subscription has remained at £20 p.a. ever since. In March of that year there were 45 members.

The first edition of the ‘New Look’ newsletter (No 13) was published in September 2002 under the header ‘The Lookout’, and Peter continued as editor until December 2004.

In 2013 the members elected Peter as President in recognition of everything he had done for the Merchant Mariners.

In March 2018 we elected a new President: Alan Tulloch, who is the only remaining member of the Merchant Mariners of Wight who was at the inaugural lunch meeting in 2000.